THREADS: The Golden Spruce, The Six String Nation Guitar, and me. 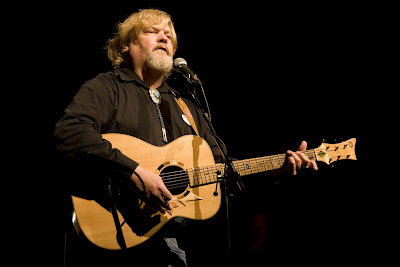 Some years ago I played at the Summerfolk Festival in Owen Sound, a festival which I had the honour to be part of starting back in 1976. While there, Jowi Taylor asked if I would like to play the Six String Nation guitar and I took it on stage for a rendition of my song "Down To The River." Photographer Doug Nicholson was traveling with Jowi and the guitar at the time and snapped this picture.

Some years, or it seemed like lifetimes, later I found myself living on Gabriola Island. I was contacted out-of-the-blue by Jowi to see if it would be OK with me if this picture became part of a montage to be on the packaging of the Six String Nation Guitar coin. The fifty-cent coin commemorating the guitar was to be minted and sold by the Royal Canadian Mint. Of course I agreed, and sure enough the picture made it onto the packaging when the coin was released.

Now living in the Pacific Northwest, I became curious about the mysteries of ancient rain forests and the Pacific itself. I had played in Chicago at a show sponsored by the Canadian Consulate, and there I had met dancers from Haida Gwaii. We made a "connection" I felt at the time, and since I was now living in the region, also became more interested in Haida Gwaii itself.

Knowing of my interest, a friend sent me a book entitled "The Golden Spruce," written by John Vaillant. This book is the story of a 300 year old Spruce which grew on Haida Gwaii and whose needles appeared to be golden in colour. The reason for this colouring, it turns out, was due to a disease, still the tree survived and indeed thrived. It was seen as magical by the population of Haida Gwaii and the tree held a fascination for all who had seen it.

The Golden Spruce was tragically cut down in 1997 by a seemingly misguided soul who perhaps felt he was making a political statement about the logging industry. This brutal taking of the tree served only to increase its fame and attraction. The community on Haida Gwaii insisted that the spruce stay where it had fallen and be protected from vandals in order that it return to the earth in as whole a condition as possible.

Now, the Six String Nation guitar, for those who do not know, is constructed of all things Canadian. Wood from Prime Minister Trudeau's paddle, a piece from the NHL ring of Rocket Richard, a piece of a seat from the original Massey Hall...67 items in all. Constructed by Canadian luthier George Rizsanyi, it was the brainchild of Jowi Taylor to be an instrument to commemorate Canadian music. You can read all about it at www.sixstringnation.com.

As I said, I had the privilege of playing the guitar at Summerfolk...what I learned only after I had played it, and after I had read "The Golden Spruce," was that the top of the guitar had in fact been made from the Golden Spruce itself! Permission had been granted by the community to take enough wood from the felled tree to construct the top of the guitar. The hair on the back of my neck stood up when I found this out...as I say, AFTER playing the guitar, and AFTER reading the book....whew!

So life is circular, we are all connected indeed, and I am privileged to have had my life intersect with so many beautiful opportunities.